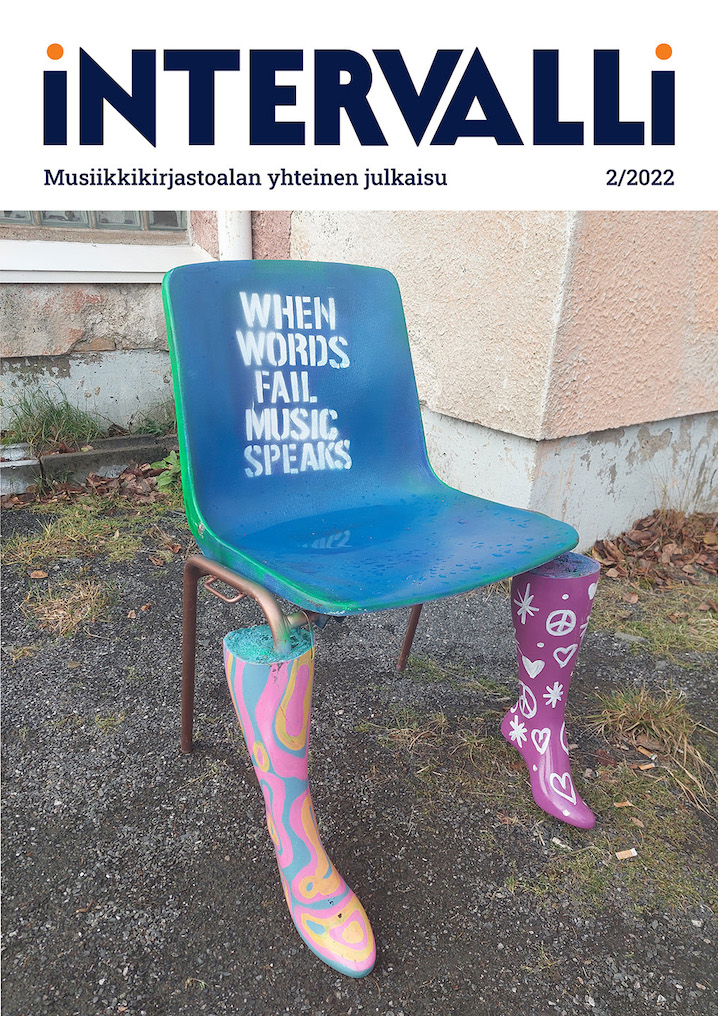 TT: What kind of changes have happened in the music departments in Danish public libraries? Are there any music librarians left there?

AC: Music library activities in Denmark have changed rapidly and in just a few years there is not so much left, not of music libraries, not of music activities and not of engagement. The biggest change is probably the arrival of internet and music services there. People’s use of Spotify and other services have made music libraries less important. Then there have been cuts in many library budgets, and one thing that is hit the most is very often music activity. That is kept at a low level and very often music librarians are moved to other departments and only keep a small part of their daily duties in the music library. There are of course quite a few music librarians left, but, as I said, not many work full time as such.

ØH: The music has always had tough conditions in the Danish libraries. It had to fight its way into libraries and, despite great success among users, it has probably never been really recognized among the ”real” librarians – the literary ones. Having said that, music thrived in libraries in the 60s, 70s, 80s and 90s, and was somewhat accepted as one of the public library services. But when the Internet announced its arrival and music became increasingly available online, interest among users declined accordingly.

As Danish public libraries were also challenged by constant savings, it caused many of the ”real” librarians, including library managers, who had otherwise almost accepted and perhaps even recognized music in libraries, to look askance at it again. Now it was necessary to focus on the core task – the dissemination of literature. The few newcomers and remaining music librarians put a massive effort into renewing music dissemination from exclusively lending to include a multitude of different types of events to a much greater extent, from concerts – over lectures – to the establishment of listening clubs, the production of podcasts and much more. The users welcomed the new initiatives, though they still didn’t enjoy serious recognition among the literary library establishment.

The evolution of media and the ubiquitous access to almost anything has been the dominant factor here, and as consumers the statistics are not wrong: we always choose convenience above all else. And if the price is low enough [read: free], then we don’t really care if it’s legal. Over time, legal services have come online, the big music streaming services, but before that it was pure piracy, where the Danish public libraries actually had an early legal online offer where you could ”downloan” music. But when the big streaming services came along, the demand for this product also disappeared.

The status of the Danish public libraries today across the board is that users largely get their musical needs met on digital online services, that the budgets for music dissemination are a fraction of what they have been in the past, that music librarians are a rarity, and when and if they are there, music is most likely only a small part of their total workspace. As music has taken up less space in libraries and there have been fewer music staff, recruitment of new members to the association has also continuously gone downhill.

TT: How is the situation in university libraries?

AC: Within the university world, I do think the situation is a bit more stable. Conservatoires need to keep their collections up to date and maintain a certain service.

TT: Is there any education on music librarianship? And what about continued training?

ØH: The Royal School of Library and Information Science has undergone several changes over the past 20 years and is now closed as an independent institution. The programmes were placed under the University of Copenhagen, but after several restructurings, there were severe cuts in the staff that originally came with the Library School to the University. The library-specific parts of the education, as far as I am aware, are almost non-existent, and an actual librarian education or training does not exist in Denmark anymore. But even before all this, the Royal School of Library and Information Science had already discontinued the music-specific electives in the programme.
AC: As far as I know there is no education or training for music librarians left in Denmark.

TT: How did the Music Library Association in Denmark react to the situation in Danish libraries?

ØH: The Music Library Association in Denmark has continuously tried to talk up music and sought to defend the conditions of music in libraries, but without much success. Maybe we didn’t shout loud enough, and someone might think we should have fought harder. But we have done as well as we could under the given conditions and with the resources we had available.

TT: Why did you come up to this conclusion, to suspend the association?

AC: In Denmark I think the decline in interest went together with the politicians giving less and less money to music libraries, removing music departments, and giving the music librarians a lot of other duties. Many felt stressed and worn out, and there was very little time to dedicate to a voluntary organisation.

Sometimes we succeeded in arranging a special study day or something, but it became less and less frequent. Then the Covid years came and more or less put an end to it all. Before the Pandemic we tried to keep the Danish IAML up and alive and organised at least one yearly event, or supported events organised by others. But the interest just faded. We have an annual meeting once every two years and we noticed there also that no one wanted to come. At the meeting 2,5 years ago it was only the Board plus 2 members – and this year only one member apart from the Board. There were also problems within the Board. During the pandemic several Board members have lost their jobs or moved to other duties, so no one was interested in staying in the Board – and no new Board members were available. The Pandemic was like the final blow. So we then decided to ask the members if they wanted to disband the organisation. We had expected some to become upset and sad, but no. All those who voted, voted in favour of disbandment and the decision was taken to disband the organisation by 1.7.2022. A very sad decision, but when there is no engagement…

In Denmark there were actually two music library organizations up until now: DMBF (The Danish Branch of IAML) and MUFA, a music organisation within the trade union for librarians. MUFA still exists, but has the same problems. They have had no activity at all since early 2019. The Danish Library Association has so far not reacted at all to our organisation being disbanded.

And it has been absolutely impossible to recruit new board members. Where former board members have in some cases been allowed to spend working hours on their board work, for the past several years it has only been leisure work for the board that has been sitting for a long time. Several of the board members, including myself, no longer work with music or in libraries, and therefore find it increasingly difficult to prioritize the board work.

Each time the association has sent out dues collections, member libraries have dropped out because they suddenly became aware of an expense that could be saved without anyone really noticing. Based on a tendency for the interest to have been declining, just like the dues income, while the expenses, not least for IAML membership, have remained the same, the board, after several years of consideration, has gradually found it pointless to continue an association that no longer has anyone’s interest and also really doesn’t make any difference anymore.

AC: One thing that both I and Øjvind agree upon, is that we also want to tell you, that the remaining funds of the Danish Branch of IAML have been given to Syddansk Universitetsbibliotek and a project called Digitalt Jazzhistorisk Arkiv. We had a call for interested projects out, but only received one application, so it was decided to give the money to this project.

AC: I am just so delighted to hear that the enthusiasm in Finland for Music Libraries is so great. Try to keep it that way, engage as many members as possible in your work, try to keep the enthusiasm up and try to arrange one or two yearly events that people can attend, meet each other and exchange ideas. The more members that are involved and feel responsible for the future of the organisation, the less is the risk, I think, that something might go wrong. And do come to the IAML annual Congress. It does give you quite a lot of enthusiasm and inspiration. In the last few years, there has been almost no interest in attending from Denmark, despite the fact that we handed out scholarships to those who wanted.